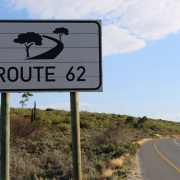 Also known as the Wine Route, Route 62 leads through the wine-growing areas of Wellington, Tulbagh, Worcester, Robertson and the Klein Karoo and is thus one of the longest wine routes in the world. Activities along Route 62 include wine tours, safari drives, tribal art, cultural tours, museums, hiking, mountain climbing, 4×4 routes, canoeing, horse riding, ostrich riding, fishing, caving, and even skydiving.

Route 62 spans a distance of 850 km from Cape Town to Port Elizabeth.
Places of interest

Between Cape Town and Port Elizabeth you will be able to stop in the following towns:

GET OUR LATEST NEWS & OFFERS

Enter your email address below and we will send you our latest news,
events and offers directly to your inbox.

The Garden Route – An Introduction